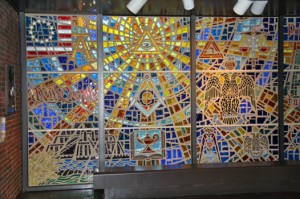 Stained glass window at the Museum

1730s. In 1732, Lodge L’Anglais, the first Ecossais lodge, was formed in Bordeaux, France, conferring only the first three degrees of Masonry. By 1738, advanced degrees may have been conferred. Masonic tradition holds that these degrees were transmitted from France, through the West Indies, to America. In 1767, Henry Francken established a Lodge of Perfection in Albany, NY.

Nothern Masonic Jurisdiction was formed, and Daniel D. Tompkins was chosen as its first Sovereign Grand Commander. Tompkins was later elected Vice President of the United States, under President and Brother James Monroe, in 1816.

In 1827, an anti-Masonic furor gripped the United States, almost destroying the fraternity. Sovereign Grand Commander John James Joseph Gourgas, kept the Scottish Rite alive during this turbulent period in history. Today, the Gourgas Medal, the highest honorary decoration awarded by the Northern Masonic Jurisdiction, is named after him.

In the 1840′s, rebuiding the fraternity from the dark anti-Masonic years, new Valleys were established in New Haven, CT, Pittsburgh, PA and Chicago, IL.

In 1879, Sovereign Grand Commander Leon Abbott moved the headquarters of the Northern Masonic Jurisdiction from New York to Boston. When Abbott died, his will provided for the Leon Abbott Scholarships, which are still awarded today, to children, grandchildren and stepchildren of Scottish Rite Masons who are academically eligible.

In 1968, Sovereign Grand Commander George A. Newberry moved the headquarters of the Northern Masonic Jurisdiction to Lexington, Massachusetts, on a site only one mile from where the American Revolution began.

In 1975, President and Brother Gerald R. Ford presided over the opening of the National Heritage

Museum, on the grounds of the Supreme Council in Lexington.

In 1995, Sovereign Grand Commander Robert O. Ralston began a new charity, as the first 32nd Degree Scottish Rite Learning Center for Dyslexia opened. Dedicated to teaching dyslexic children how to read, the Centers, now numbering more than 50, perform this service at no charge to the